Albury Conservation Company is dedicated to researching local wildlife to increase our community’s understanding of threatened species and how they are responding to urbanisation.

The following research projects were funded by Albury Conservation Company: 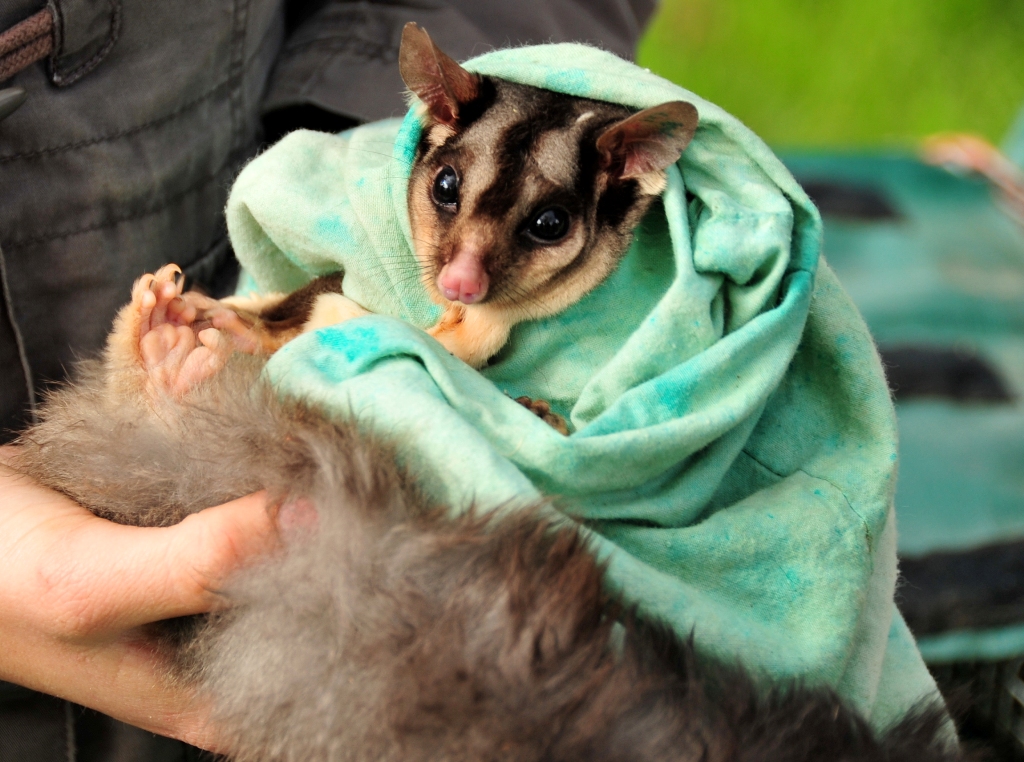 This was a two year research project commissioned and funded by the Albury Conservation Company, and undertaken by Christopher Stewart and Rodney van der Ree from the Australian Research Centre for Urban Ecology (University of Melbourne). The Squirrel Glider (Petaurus norfolcensis) is a NSW listed threatened species which has a significant local population. Below is the conclusion from the report:

CONCLUSION
The best estimate scenario suggests that that the Squirrel Glider population in the study area is
viable and likely to persist for at least a hundred years. However, we should interpret this result
cautiously as there is uncertainty in many of the model inputs and hence also in the model outputs. The endpoint comparisons showed that varying the input parameters within intervals reflecting our uncertainty in their true values could change the output population size greatly. This was most noticeable for the broad-scale survival parameter, which had the most impact.

Creating and maintaining connections in the habitat to facilitate Squirrel Glider movement could
help keep the population size high. This was seen in the landscape alterations section. Furthermore, it was observed that creating joins in the vegetation could help offset the negative impact of the Hume FWY. The population adjacent to the Hume FWY could be acting as a population sink and draining animals from the study area. We confirmed this when we isolated the Hume FWY with cuts in the landscape and this lifted the density in the central portion of the region of interest. However, we assumed the existence of low survival rates adjacent to the Hume FWY and that these rates were driving the sink effect. At this stage the research supporting these rates needs to be clarified (McCall et al. in review) and therefore we cannot be certain whether the sink effect exists or not. Thus whilst using cuts could also be used to help mitigate a possible sink effect, to avoid unnecessarily fragmenting the landscape, it might be more appropriate to prioritise efforts towards maintaining connections in the habitat, especially in areas away from the highway initially, as this would be beneficial either way.Caution should be taken when interpreting the results of a model due to the uncertainty
surrounding the model’s inputs, structure and assumptions. For example, whilst our model suggests that the population might be viable if broad-scale survival is 0.7 (i.e. in the best estimate scenario), this should only be used as a rough guide. Modelling should work hand in hand with monitoring and field studies, which can be used to detect population decline. Furthermore, monitoring and field studies can improve an understanding of the system; new information from field data can help better inform management and can also feed back into future modelling efforts. (For a short discussion of monitoring see Appendix E.) In the Thurgoona and Albury Ranges study area, field studies could help establish what the survival rates are in different parts of the landscape. This would be useful to know, as we found in the localisation scenario that the population could possibly support regions of low survival as long as they are not too widespread.
In conclusion, our best estimate scenario suggests that the Squirrel Glider population is likely to
persist in the study area and that it is therefore viable. However, due to the uncertainty surrounding 52 our model inputs and hence outputs, this result should be treated with some caution. Monitoring and field studies could be used to detect population decline and to better understand the system.

Furthermore, management could aim to make the population robust against extinction by taking measures such as controlling predation by cats, conserving large hollow bearing trees, keeping an understorey, and creating and maintaining connections in the habitat. 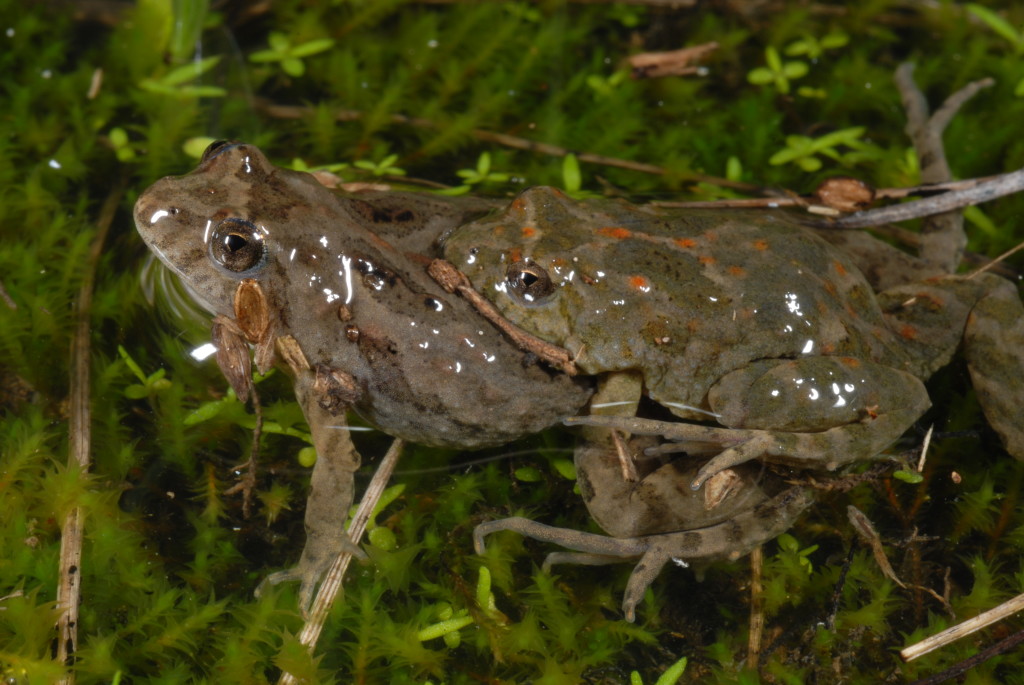 Albury Conservation Company also invested in research of the Sloane’s Froglet (Crinia sloanei) by Alexandra Knight, a Phd student of Charles Sturt University. Sloane’s Froglet is listed as vulnerable in NSW, and is a small ground-dwelling frog found in the floodplains of the Murray-Darling Basin.The specific threats to the species are not well understood, but include degradation of habitat quality through clearing, overgrazing, changes in flooding regimes, predation, and climate change. Chytridiomycosis, an infectious disease caused by the amphibian chytrid fungus Batrachochytrium dendrobatidis, may also be a threat to Sloane’s Froglet. The report was completed in 2013.

Sloane’s Froglet, Crinia sloanei, is a small frog with an historical distribution in north central
Victoria and central western NSW from the Victorian to the Queensland border. It has been
sparsely and infrequently recorded across its range, especially in the last 10 years. It is
listed as Vulnerable (Hughes, 2008) under the NSW Threatened Species Act and as data
deficient by the IUCN (IUCN, 2013).

Very little is known about the species. It was necessary to develop an understanding of the current distribution in order to gain an insight into the species and underpin the design of future research.

This report has two aims. Firstly, it examines the distribution of Sloane’s Froglet from its
time of discovery in 1957 (Littlejohn 1958) to the present time as made available in wildlife
databases and in other records provided by herpetologists. Secondly, it presents the recent
distribution information developed from surveys undertaken in 2010, 2011, 2012 and 2013
by the author as part of her PhD research programme.

Historical distribution records for Sloane’s Froglet were obtained from two main sources.
Firstly, records from NSW and Victorian wildlife atlas databases were accessed. Secondly,
personal requests were made to herpetologists who have worked within the region where
Sloane’s Froglet is known to have occurred. Historical records showed that Sloane’s Froglet has been recorded from sites in NSW and Victoria, with the majority of records in the Darling Riverine Plains, NSW South Western Slopes, Riverina and Victorian Midlands bioregions. The number of records in the last 20 years has declined.

Recent records from surveys undertaken by other herpetologists showed that Sloane’s
Froglet has been located in the Namoi catchment in northern NSW (Phil Sparks, pers.
Com.).

For this project distribution surveys were undertaken in the winters of 2010, 2011 and 2012.
A brief survey was also undertaken in 2013. Surveys focused on establishing the current
presence of Crinia sloanei at sites where it had been previously found in southern NSW and
northern Victoria. After its presence was established intensive survey work was undertaken
in neighbouring areas to extend the known distribution. In addition, community input into
finding the froglet was requested through popular media.

Significant populations of the species were located in the Albury and Corowa regions of
NSW and the Wahgunyah/Rutherglen region of Victoria. These surveys were limited by the
available resources and the unusually wet conditions. Further survey work would no doubt
extend the current known distribution of this species.